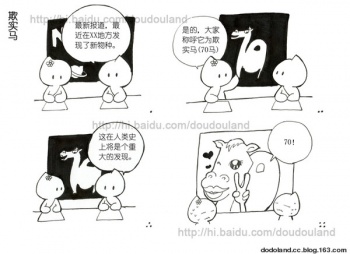 The horse of deception roamed freely before being trapped in the Well of Commerce (交井 Jiāo Jǐng), i.e. by the traffic police (交警 jiāojǐng), and was trapped inside by centuries of grass-mud horse excrement. It was customary for the rich to cast their money into the well when faced with difficulties. Finally, in May 2009, the horse of deception burst free to cause mischief once more.

In Mandarin, “horse of deception” sounds the same as “70 kilometers per hour” (七十码 qīshí mǎ). It refers to the 70 kph incident, in which the son of a wealthy man ran over and killed another man. Police maintained the driver had only been going 70 kph (about 43 miles per hour), despite onlookers attesting that the car had sped past at 100 kph (about 62 mph).