谁叫你不幸生在中国了? (Shéi jiào nǐ búxìng shēng zài Zhōngguó le): How were you so unfortunate as to be born in China? 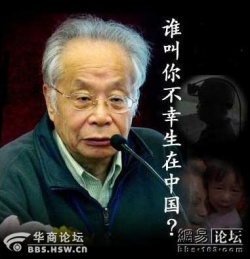 He Zuoxiu: “How were you so unfortunate as to be born in China?”

This question was posed by He Zuoxiu, a 78 year-old professor at the Chinese Academy of Sciences, in a heated exchange with a reporter. The reporter asked about deaths in coal mines, alleging that more than one hundred people die daily in China’s coal mines. He Zuoxiu countered that a much greater number died in car accidents. When pressed by the reporter as to whether the coal mine deaths were the avoidable results of government corruption, Mr. He denied this and claimed instead that the deaths were necessary byproducts of poverty. He then asked, “How were you so unfortunate as to be born in China?” (谁叫你不幸生在中国了) and added, “In the process of development some sacrifices are unavoidable” (发展过程中的牺牲是不可免的).

Mr. He’s comments were seen to symbolize the sort of emotional detachment with which the government single-mindedly pursues its overarching goal of developments. His comments also became a critique against the Hu Jintao administration’s mantra of “scientific development.”

The original exchange between He Zuoxiu and the reporter is below:

Reporter: Do you know how many people die in China's coal mines each day?

He Zuoxiu: The newspaper says more than 100 people...

Reporter: Do you believe that number?

He: Overall it seems realistic...

Reporter: Have you seen the movie “Blind Shaft”?

He: I'll tell you, the largest cause of death in China is not coal mines, it's car accidents, 120,000 deaths each year!

reporter: Car accidents kill people in every country. It's unavoidable...

He: How do you figure that traffic-related deaths are unavoidable? Why isn't that a problem? Ha, you are absolutely right that it's unavoidable! Deaths in coal mines are also unavoidable! Because the common people of China are too poor.

Reporter: So, you think it's poverty and not corruption?

He: Mainly poverty and not corruption. Why must workers take low wages for more dangerous work conditions? They aren't idiots, it's not that they don't know any better. So why do they accept it? Because if they don't it's impossible to make a living.

Reporter: So they ought to accept this as their fate?

He: (You're complaining about) How were you so unfortunate as to be born in China?

Reporter: But the innocent shouldn't have to die, this can be avoided.

He: Who is innocent? Who can prevent this? It has a probability distribution. I also don't want people to die, but in the process of development some sacrifices are unavoidable. You wish there isn't even a bit of sacrifice; that is an unrealistic way of thinking.