This is a reference to Hu Jintao. On December 30, 2010, CCTV repeatedly broadcast a conversation Hu had with a mother and daughter while Hu was visiting a housing project in Beijing. Hu asked the two how much they paid in rent every month and if they were able to manage paying that amount. The mother answered that their rent was 77 Yuan (approximately USD$11.00) and added, “We’re able to manage [paying the rent] thanks to the good policies of the Party and of the government.” See this portion of the broadcast here.

Netizens, astounded by, and very much skeptical of, the woman’s answer gathered to watch as this news blurb went viral on the internet. (Some netizens claimed that housing prices in that complex would be more like 2000 yuan.)

Housing prices in China have risen dramatically over the last decade. According to the Telegraph, the average person in Beijing would take 50 years to buy an average apartment, assuming they saved every penny they earned. Housing prices have outpaced inflation leading many to consider themselves "mortgage slaves" forced to live in “snail dwellings”.

After this event, netizens created a number of parodies using the number 77. Several of these are translated below: 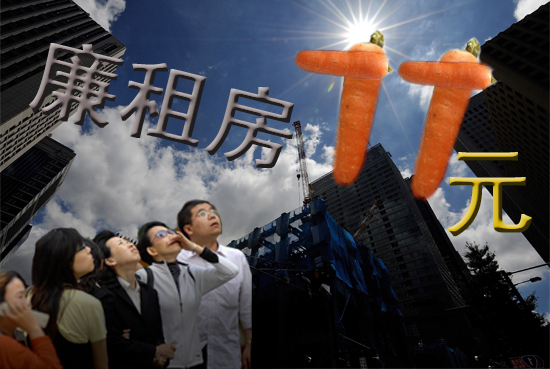 Crowds gather to marvel at the advertised housing to be rented at the incredibly low rate of 77 Yuan. The carrots are a pun on Hu Jintao's name.