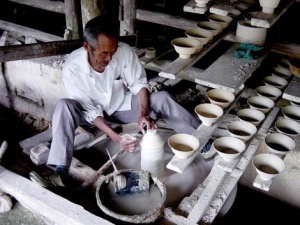 The name of a town in Jiangxi Province known as the “porcelain capital of China,” which is used as an online code word to refer to all of China.

When netizens write about China, the word “China” is often picked up by sophisticated Internet filters that look for sensitive words (also known as sensitive porcelain) and screen for political content. Because porcelain is often referred to as “china,” the name of this township is used to get around Internet censorship.

It’s a small town that produces cups and dinnerware daily.

To those in the know, this can be read as:

It’s a small town that produces tragedy and misfortune daily.

Amid a massive crackdown on Internet rumors in 2013, verbal play on the word “rumor̦̦” established residency in Jingde. The Mandarin word for “rumor” (谣 yáo) sounds identical to the word for “kiln” (窑 yáo), an essential instrument in the porcelain-making process. As central authorities used their crackdown on rumor-mongering to gain control of online public opinion by targeting many influential online personalities, netizens began to draw attention to many cases where public officials were responsible for spreading untruths. This underlined two distinct types of rumors: 民谣 (mínyáo, literally “people’s rumors”), and 官谣 (guānyáo, literally “official rumors”). As such, the following sentence seems to merely explain two types of kilns in Jingde:

“Official kilns” are a reference to the state-owned kilns of China's dynastic period, many of which can be seen today at heritage sights in Jingde. By replacing the character for “kiln” in the above sentence with the homophonic character for “rumor,” the sentence could be interpreted to mean “the rumor mills of Jingde Town make sensitive porcelain. Some come from rumors spread by the people, and some come from rumors spread by officials."

Another codeword for “China” is Celestial Empire.