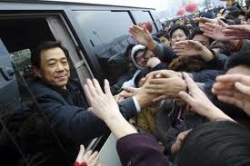 This is a nickname for Bo Xilai, the former Politburo member and Party Secretary of Chongqing, who was removed from his posts in March and April 2012 after his former police chief, Wang Lijun, attempted to defect to the United States, and his wife, Gu Kailai, became the subject of a murder investigation.

In September of 2013, Bo was sentenced to life in prison for bribery, embezzlement, and abuse of power.