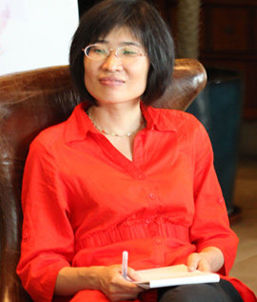 Lü Pin was born in Shandong Province. After attending Shandong University for her bachelor’s and master’s degrees, she joined China Women's News (中国妇女报), a newspaper issued by the All-China Women's Federation. In 1995, she reported on the U.N. World Conference on Women in Beijing, a landmark event for women’s rights. In 1996, Lü started “Gender Watch China” (妇女传媒监测网络), a non-profit media platform dedicated to addressing gender discrimination in news reporting. In 2003, Lü served as a deputy county chief in Gansu shortly before resigning and becoming a freelance journalist.

In 2010, Gender Watch China started a Weibo account which later became known as Feminist Voices, which quickly accumulated followers. In 2012, Lü Pin and other activists started a series of street protests to advocate for gender equality. Shortly before the International Women’s Day in 2015, Chinese authorities detained five feminist activists for organizing anti-sexual harassment campaigns. Lü Pin, attending a conference in the United States at the time, was prevented from returning to China. She has been living in the United States ever since and continues to advocate for women’s rights.

In early 2018, Feminist Voices became one of the leading media platforms that closely followed China’s #MeToo movement. In March 2018, the account was shut down on Weibo and WeChat. In April 2021, Lü Pin’s personal Weibo account was shut down following a cyberbullying campaign targeting feminist activists.