This statement was made by Jiang Yu, the Foreign Ministry Spokesman.

During China’s short-lived attempt at following the “Jasmine Revolutions” of the Middle East, foreign journalists attempting to cover the “revolution” were roughed up by police. At a press conference, journalists asked what law they had violated. The following are Jiang Yu’s comments, translated by Human Rights in China:

Answer: The violation is of relevant regulations regarding the need for an application when going places to interview people. Don’t use the law as a shield. The real problem is that there are people who want to see the world in chaos. They want to make trouble in China. For people with these kinds of motives, I think no law can protect them. I hope everyone will sensibly recognize this problem. If you truly are reporters, then you should behave in accordance with the journalists’ professional standards. While in China you should respect China’s laws and regulations. Looking at the past two situations, those journalists who were waiting for something to happen did not get the news they expected. If during those two days there were people who incited and instigated you to go somewhere for an illegal assembly, I suggest that you promptly report that to the police, in order to, one, protect Beijing’s law and order, and two, protect your own safety, rights, and benefits:

Jiang’s comments were extremely controversial, leaving many netizens wondering “what good is the law if it doesn’t protect us?” Perhaps the most notable response to Jiang Yu’s comments was an editorial in Southern Weekend by Chen Youxi (陈有西). A partial translation of Chen’s comments are below, as translated by the China Media Project. 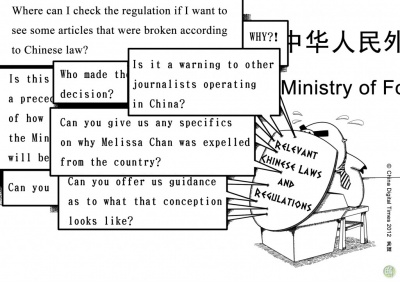 “The law is not a shield” is applied beyond its original context to other murky decisions from above.

This turn of phrase has also been related to more recent events, such as the expulsion from China of Al-Jazeera reporter Melissa Chan.