Difference between revisions of "Love the place that hates you" 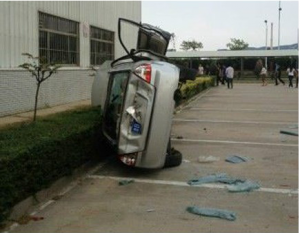 Chinese drivers of Japanese cars had trouble on the road during 2012 anti-Japan protests. (Source: Weibo)

To support the government against one's own best interests; to harm oneself in the name of patriotism. Short for "fated to eat ditch oil, worried about Zhongnanhai" (chī dìgōu yóu de mìng, cāo Zhōngnánhǎi de xīn 吃地沟油的命，操中南海的心).

Those fated to eat ditch oil—cooking oil "recycled" from leftover food—are average Chinese citizens, who are neither wealthy nor powerful enough to escape the consequences of lax regulation and poor governance. It doesn't make sense for them to be concerned about Zhongnanhai, the Beijing headquarters of the Chinese Communist Party and the State Council. But those who "love the place that hates them" take it upon themselves to show their devotion to the Party and the state, even when they hurt themselves in the process.

This saying arose from the anti-Japan protests of 2012, after the Japanese government announced its plan to purchase the Diaoyu Islands. Some protesters attacked "Japanese" businesses and flipped Japanese cars, even when their owners were Chinese. A second part to the saying goes, "Angered by the Japanese, smashing the cars of the Chinese" (shēng Rìběnrén de qì, zá Zhōngguórén de chē 生日本人的气，砸中国人的车). Thus a ditch oil diet is destined for those who harm their peers as they "protect" the country.

"Love the place that hates you" is sometimes translated as "diaos with a chairman heart," playing on "loser" (diǎosī 屌丝).

@_echoliao: Every day I check Weibo and find that love the place that hates you feeling. I've lost hope for this world. (April 18, 2016)