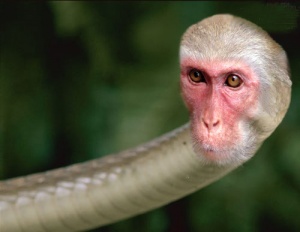 Monkey-snake, primate of the simianus serpentii family. It has a developed brain, a humanoid face, the head of a monkey, and the body of a snake. A face also appears on its buttocks. Adept at mimicking human speech, but mostly utters lies. Appearing in Russia approximately 100 years ago, the monkey-snake was once wide-ranging in Eastern Europe, Northeast Asia, and Africa. Today, it lives in Northeast Asia and Latin America. Variation presents in the species, but those seen in mainland China and the Korean Peninsula are considered purebred. On April 1, 2009, Chinese scholar Ling Cangzhou proposed that April 1 be marked as "Chinese Monkey-Snake Day," in order to raise awareness of this endangered species. [Chinese]