Difference between revisions of "Muzi Mei" 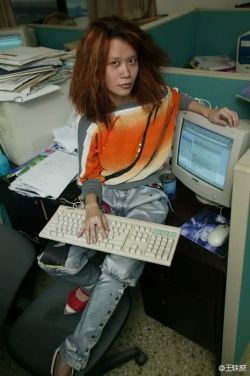 Muzi Mei (Chinese: 木子美; pinyin: Mùzǐ Měi; born 1978) is a journalist and blogger from Guangzhou, China, who became an Internet celebrity in late 2003. Her blog contained frank descriptions of her sexual encounters with various men, which is believed to be a first for China. Her real name is Li Li (李麗 Lǐ Lì) -- "Muzi" (木子) becomes "Li" (李) when the characters are arranged vertically, and "Mei" (美) and "Li" (麗) are synonyms (both mean "beautiful"). She studied in the Department of Philosophy in Sun Yat-sen University in Guangzhou, and graduated in 2001. (Wikipedia)

Narrating and even podcasting hundreds of amorous encounters, Muzi Mei pioneered the blogging scene in the early 2000s. Traditional print media briefly lit up with her sensational rise, before officialdom issued an alleged cease-and-desist letter.

In 2003, CDT Editor-in-Chief Xiao Qiang compared Muzi Mei to a very different tell-all blogger, Du Daobin. While Muzi Mei faced a mix of censure and celebrity, Du was serving the first of what would be two prison sentences for writing in defense of democratic values:

I cannot help but link Mu Zimei [sic] with Du Daobin. Both of them have “fully expressed” themselves on Internet. Mu’s writing is about her private sex life, and Du’s is about his critique on public life, that is, politics. Mu is now a national celebrity while Du is in prison. Sex is promoted and politics is forbidden on Chinese cyberspace. Can we find a clearer indicator than these two cases? [CDT]