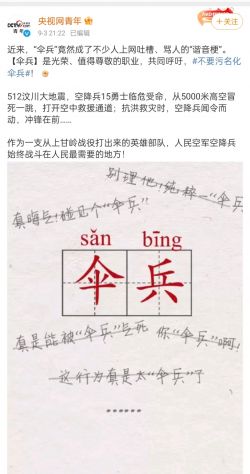 CCTV Youth Weibo post imploring readers to use the word "paratrooper" properly, rather than as a substitute for a curse word

Euphemism for "stupid cunt" (shǎbī 傻逼). In September 2021, when Baidu banned shǎbī from its messaging forum Tieba, users quickly started peppering their posts with the homophonous "paratrooper" (sǎnbīng). This amounted to a verbal hostage situation, forcing state media to respond in defense of the honor of the airborne forces, which in turn forced Baidu to "release" the "imprisoned" curse word days later.

In the aughts, a mythical creature like the grass-mud horse might have been conjured to stand in for the censored word. The paratrooper incident was a rare win for Chinese internet users in an increasingly sanitized digital environment.