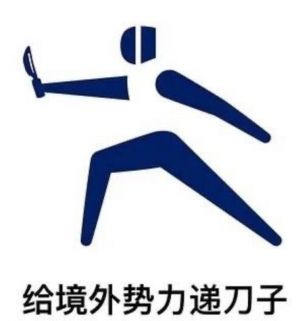 “Passing the knife” is term favored by nationalists to accuse others of aiding and abetting China’s enemies, more often than not foreign (hostile) forces. The phrase’s literal meaning is to hand a knife to a murder. Nationalists argue that by publishing information out of line with Party orthodoxy, journalists, writers, public intellectuals, and the like are “passing the knife” to foreign enemies eager to smear China. The phrase entered the mainstream after it was used to attack Fang Fang for her diary of life under lockdown in Wuhan during the early days of the pandemic. When Michael Berry translated Fang Fang’s diary into English as Wuhan Diary: Dispatches from a Quarantined City, both Fang Fang and Berry came under incessant attack from nationalists.

There was also significant pushback against the term. Weibo user @小木头咋都被占用了 wrote in defense of Fang Fang on Li Wenliang’s Wailing Wall: “Lu Xun wrote ‘A Madman’s Diary’ and the errors in that were far more severe than in Fang Fang’s diary, was he also passing the knife to foreign forces?” An essayist satirized the reflexive xenophobia of nationalists by writing that a BBC report praising the great Tang Dynasty poet Du Fu had made them skeptical of the poet’s work. After investigating further, they found Du Fu had “passed the knife” to the An Lushan rebellion—not such a patriotic poet after all! One Zhihu user pointed out that American media is often harshly critical of American society to no ill effect: “‘Knives’ passed to us by the American media can’t harm the U.S., but ‘Fang Fang’s Diary’ can hurt China? Is China really that weak?”