Difference between revisions of "Poison rice" 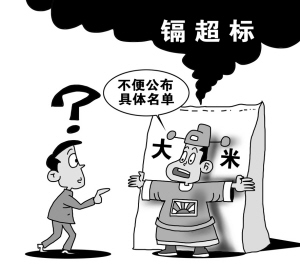 “It isn’t convenient to write down all the ingredients,” explains the imperial official. Cadmium billows out of the bag of rice he guards.

Rice that has been treated with toxic chemicals to increase its marketability. Old rice (陈米 chén mǐ) that has been stored for over a year is polished, treated with chemicals, and coated with paraffin, giving the grains a translucent appearance. The treated rice can cause negative health effects.

“Poison rice” became an online watchword in May 2013 with a scare over rice that had been tainted with the toxic heavy metal cadmium (镉 gé).

Food safety scandals repeatedly pop up in China, creating a general unease about products like cooking oil, infant formula, and fast food. A list of 50 “Toxic Foods You Need to Know” from 2008 covers an unnerving range of products.