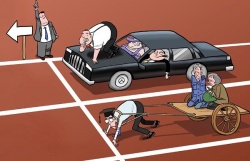 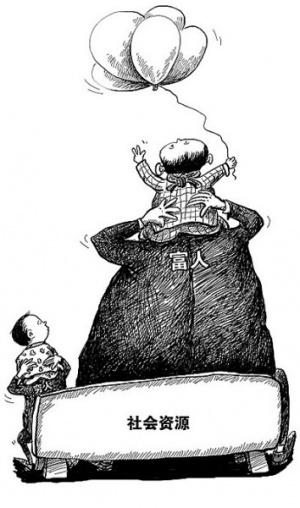 The larger figure, labeled “rich person,” holds his child aloft next to the smaller “poor person.” Both figures sit on a bench labeled “Society's Resources.”

Before China’s reform and opening up, Communism had substantially leveled the playing field and most people were more or less on the same economic level. With Deng Xiaoping's free market reforms, the gap between rich and poor became more apparent and began to widen. The children of those who prospered during the reform and opening up period are call the “rich second generation,” while the children of those who did not prosper are called the “poor second generation.” Commentators complain that institutional barriers (high cost of education, importance of connections, etc.) serve as barriers standing between the poor second generation and economic mobility.