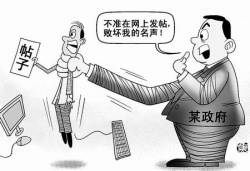 Meiticundexiaobai_xiaobaCO (@媒体村的小白_小疤CO): I'm just an "antizen!" but I think I have the right to do this! I hereby propose: the Party Central Committee with Comrade Xi Jinping at its core and the People's Government shall carry out this biggest action since the founding of China! Dissolve the "Relevant Department!" Eh... Welcome to check my water meter. Welcome to cross the provincial lines! (October 28, 2014)