Difference between revisions of "Push-ups"

This word has an additional meaning related to the Weng’an incident. The incident started after speculation that the son of a government official had raped and killed a 16 year old girl. In trying to quell the outcry, the police claimed that the boy did not kill the girl. They stated that the girl and a boy had been arguing along the bank of a river. After the couple calmed down, the boy began to do some push-ups next to the girl. The police claimed that after he had done three pushups he heard her say, “I’m going” after which she jumped in the river and drowned herself.

People did not believe the police account, and a riot ensued which involved tens of thousands of people. After the event the phrase, “I was doing push-ups" became a coded critique of the unpersuasive police excuse. As the phrase has spread it has shed much of its political connotation and in many usages has no clear particular meaning. It sometimes means "I have nothing to do with the matter." At other times it can refer to a nonsensical cause of death. 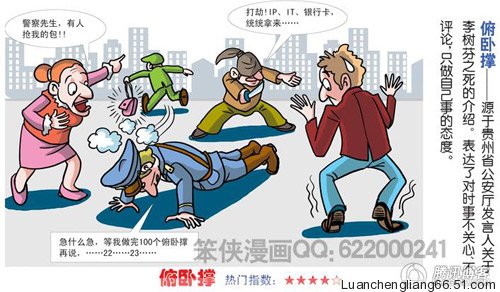 A police officer doing pushups (i.e., minding his own business) while people are being robbed.
Retrieved from "http://chinadigitaltimes.net/space/index.php?title=Push-ups&oldid=3138"
Category: