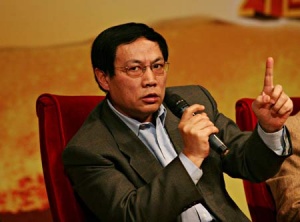 Nicknamed "Ren the Cannon" (任大炮) by Chinese netizens for his brashness, Ren Zhiqiang (b. May 8, 1951) is a real estate mogul turned liberal microblogger. He was one of the last remaining Big Vs after many were silenced by a 2013 rumor crackdown. At the time when his social media accounts were shut down in February 2016, he had well over 35 million followers on Sina Weibo alone. Ren disappeared in March 2020 after he posted an essay excoriating Party officials for their response to the COVID-19 epidemic. On September 22, 2020, a Beijing court found him guilty of economic crimes and sentenced him to 18 years in prison. 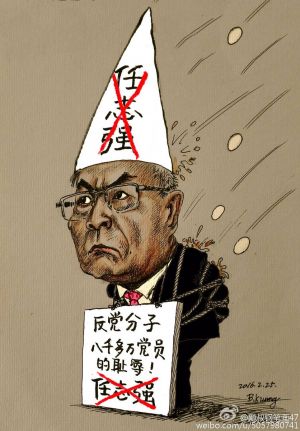 Ren served as a platoon leader in the People's Liberation Army from 1969 to 1981. He joined Beijing Huayuan Economic Construction and Development, a state-owned real estate company, in 1984, eventually rising to president of Huayuan Group Corporation in 1993. He stepped down as chairman in 2014, saying that he planned to spend time writing. Ren earned a reputation for callous entitlement, arguing in 2009 that "anyone who can't afford a house in the city should go back to the countryside." He was lobbed with shoes at a real estate association meeting in 2010.

Ren was equally as outspoken with his criticism of the government. At the NetEase Annual Economist Conference in 2013, he argued that state manipulation, not a housing bubble, was sending real estate prices soaring. "As I see it, the government has never thought it had a bubble. If it did, it wouldn't be this shady. It wouldn't use such shady land prices to adjust our real estate market," he claimed. "The government is shadier than property developers" (政府比房产商黑). That sentence was soon blocked from Weibo search results.

While Ren claimed he had no duty to "build homes for poor people," he did hold the government to account for its duties to the Chinese people. After President Xi Jinping re-asserted the Chinese Communist Party's control of state media in February 2016, Ren countered on Weibo that state media should instead serve the people whose taxes paid for the service. Days later, Ren's Tencent and Sina Weibo accounts were deleted. State media condemned Ren, who as a CCP member himself "ought to have a deep understanding of the unity between party spirit and the people's spirit." Apparently, his punishment did not deepen such understanding: in late 2017, Ren decried the mass eviction of migrant workers in Beijing and the hukou system excusing it.

As China went under lockdown to control the spread of COVID-19, Ren Zhiqiang wrote a vitriolic response to a February 23, 2020 address by Xi Jinping to cadres nationwide. Sharply rejecting the orthodox portrayal of Xi as central to vanquishing the virus, Ren describes him as an emperor in fictitious “new clothes,” and accuses him of taking credit for resolving a crisis of his government’s own making. "When the media took on the 'surname of the Party' the people were 'abandoned' indeed," Ren wrote. He went missing in March 2020, and was only confirmed in April to be under investigation by disciplinary inspectors. On September 22, 2020, a Beijing court found him guilty of corruption, bribery, embezzlement, and abuse of power while he was an executive at Huayuan. Ren was not allowed to have legal representation, and the trial took place under heavy secrecy. "WOW gloves are coming off against Beijing elite," Washington Post correspondent Gerry Shih tweeted. "Ren Zhiqiang sentenced for 18 years aka life. Wow."