Difference between revisions of "Rice bunny" 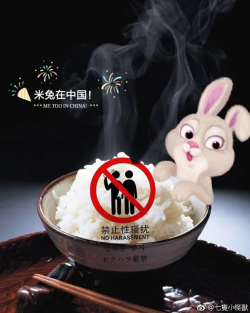 The rice bunny was born of necessity, as the censors continued chasing down hashtags related to the #MeToo movement. More than cloaking text in a protective layer, the rice bunny allowed feminists to voice their support for each other with emojis (🍚🐰), photos, and art.