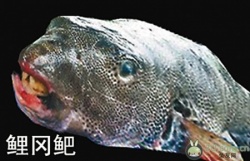 The phrase, “Li Gang's father” (李刚爸 Lǐ Gāng bà)) sounds similar to “ridged carp-barbel” (鲤冈鲃 lǐgāngbā), a fictional fish added to the pantheon of mythical creatures in 2010. According to a mock encyclopedia article [zh], the ridged carp-barbel is aggressive and enjoys ramming things with its blunt face, referencing the “my father is Li Gang” incident in which an elite teenager committed a hit-and-run while intoxicated. This creature is said to be a near relative of the horse of deception.