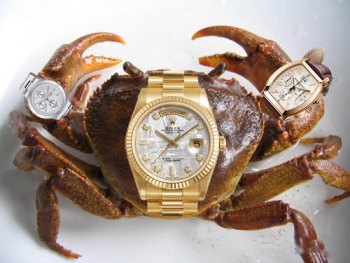 Word of the Week: River Crab[edit]

Watch Your Language! (In China, They Really Do)[edit]

Quiz: How Well Do You Know Chinese Netizen-Speak?[edit]

Music Video: “My Brother’s at the Bare Bottom” (我哥在光腚)[edit]

The word “harmonious” written in Chinese—various components have been modified to resemble the radical used in the word “crab.”
Retrieved from "http://chinadigitaltimes.net/space/index.php?title=River_crab&oldid=4531"
Category: