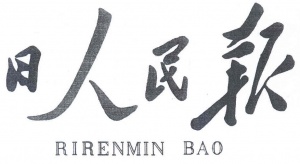 Parody of the People’s Daily (人民日报 Rénmín Rìbào) created by moving 日 (rì), a character that literally means “day” or “sun,” but colloquially means “to fuck.”

The People’s Daily is a state-run newspaper overseen by the Central Committee of the CCP. Although the paper has a worldwide circulation of three million—a number certainly bolstered by mandatory subscriptions at all official work units—netizens mock its low readership, also calling it “The Paper the People Don’t Read” (人民不看的日报 Rénmín Bú Kàn de Rìbào). Besides its uncritical adherence to Party opinion and the occasional but spectacular gaffe, readers have accused the paper of making misleading and harmful claims. Netizens joke that the only reliable information in the newspaper are the date and page number (只有日期和页数是正确的).

Qingmeizhujiulang (@青梅煮酒郎): Screwing People Post will be wiped out in the foreseeable future. "People's Daily," how much credibility do you have left? (May 10, 2014)