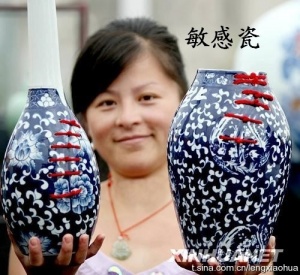 This sounds the same as “sensitive words” (敏感词), which can refer to names of politicians, religious movements (like Falun Gong), events (like The Thirty-Fifth of May) and subversive online terms (like grass-mud horse). Sensitive words are frequently blocked from Sina Weibo search results.

When famous Chinese writer and race car driver Han Han was nominated for the Time list of the 100 most influential people, he invoked “sensitive words” in a blog post:

Yesterday, I saw a news report which said that I am a candidate for the list of the 200 most globally influential people from Time magazine. Sensitive word, sensitive word, and sensitive word from China are also candidates…. I often ask myself, what contribution have I made to this society which is full of sensitive words? Maybe in the end, all I contribute is another sensitive word which is my name. That’s all….