State of Anxiety on Film, Radio, and Television (SARFT) 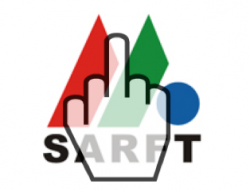 Play on the abbreviation for the State Administration of Radio, Film, and Television (Guǎngdiàn Zǒngjú 广电总局), the administrative body that until 2013 directly regulated state-owned media. The last character, jú (局, bureau) becomes jí (急, anxious) a reference to the keen sensitivity that Chinese censors are known to display when sanitizing the media.

During the National People's Congress meeting in Beijing in March 2018, a government restructuring proposal included the abolishment of SAPPRFT, to be replaced with a State Administration for Radio and Television (国家广播电视总局) that would oversee radio broadcasting and film productions. The proposal, to be deliberated at the ongoing political meetings in Beijing, has again changed the name and jurisdiction of the State Council-led media regulator.