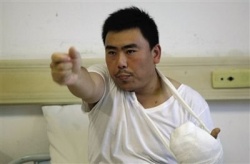 In [interviews granted to the media on September 25 [zh], 2012, the police officer said that he had “subconsciously shot” his weapon. Netizens ridiculed and parodied this explanation [zh]:

This incident in Liaoning province led netizens to draw a parallel to China's recently commissioned aircraft carrier, “The Liaoning.” If the ship were to be named “The Panjin,” it would “strike greater fear into the hearts of our enemies,” (如果“辽宁号”改名“盘锦号”，更能让敌人闻风丧胆) commented one.