“Taking a walk” along with “sightseeing” are recent forms of resistance against the government. In China, striking is difficult, applications for protests are routinely denied, and petitioning the government often brings dire consequences. Therefore, workers and citizens have adopted new methods that tread the fine line between legal and illegal. A vivid description of these methods was provided by Yu Jianrong, a researcher at China’s Academy of Social Science. As translated by CDT, Yu Jianrong stated:

Workers’ methods of resistance include petitioning higher levels of government, sit-ins, strikes, demonstrations, and blocking traffic. Two extremely important recent methods of resistance include “taking a walk” and “going sightseeing.” (PowerPoint slide) Take a look, these are workers from Baoding “taking a walk” to Beijing on April 3, 2009. It is 137 kilometers from Baoding to Beijing. When I learned the news (of the workers’ “walk”) and rushed over, they were almost at the Xushui County toll station**. At the time Beijing was very tense; Shijiazhuang was very tense; Baoding was very tense. A lot of people and workers were sent to negotiate; they said “You can’t go to Beijing like this.” The workers answered by saying, “Is there a problem with us going to Beijing to go sightseeing? There’s nothing wrong with it. What law says we can’t go to Beijing to do some sightseeing?” Those (sent to) persuade them said, “you can’t all of you go to Beijing to go sightseeing.” The workers immediately responded, “And what law exactly says that this many people can’t go to Beijing to do some sightseeing? (Those sent to persuade them against going insisted,) “In any event, you can’t all walk to Beijing to go sightseeing like this.” The workers said, “We don’t have any money, why can’t we walk to Beijing?” The situation was extremely tense. Finally, Baoding City (government) had no choice but to state right there to the workers, “We’ll resolve all your problems.” The workers said, “We don’t have any problems. Our only problem is a sightseeing problem. Look for yourselves, we haven’t brought materials to petition the government, we’re not shouting slogans, we don’t have any problems, we’re not petitioning the government, we’re not lodging complaints. We are going sightseeing.” In the end, their actions at the scene caused their company’s chairman of the board to be taken away (by the police). Only then did they return.

Everyone might think that the earliest instance of (workers) “taking a walk” was in Xiamen (in Fujian Province). Actually the earliest instance involved Anyuan coal miners. This is why I became interested in the Anyuan coal miners. These old workers (in Anyuan) requested a pay raise. No one paid attention to them. The courts would not accept their case. They wrote a report to the Public Security Bureau saying that they wanted to stage a demonstration. The Public Security Bureau did not pay attention to them. Finally this group of people went to Beijing to petition the government. Because the size of the group exceeded five, a group of people were taken away (by the police). Finally there was nothing else they could do so they planned that on a certain day 20,000 workers would all walk at the same time to Pingxiang City which encompasses Anyuan. Pingxiang is a prefecture level city; what’s up with 20,000 “taking a walk” along the roads? We’ve recently been researching this type of behavior, which is very difficult to classify as being legal or illegal. 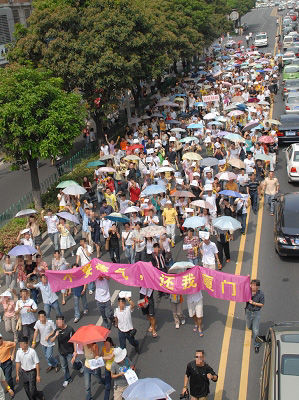 Xiamen citizens' "walk" in 2007 led to the cancellation of a planned chemical refinery.
Retrieved from "http://chinadigitaltimes.net/space/index.php?title=Take_a_walk&oldid=3238"
Category: