Lining up at a Beijing police station in Beijing in 2008. The city stepped up its enforcement of temporary residence permits before the Olympics. 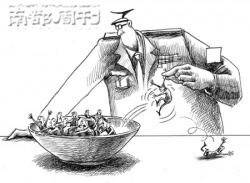 Police officer weeding out people without the proper permit. 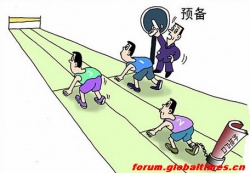 Runner #2 is chained to a post labeled “out-of-town residency.”

Permit those without the proper household registration (户口 hùkǒu) must obtain to work or live in 21 cities in China [zh], including the metropolises of Beijing, Shanghai, and Chongqing. Those in the cities without a temporary residence permit may be fined or deported.

While the disparity in development between China’s countryside and urban areas has made it economically necessary for many rural migrants to live as temporary residents in large cities, the permit system prevents them from enjoying the same privileges and rights as those originally from the cities.

Online, “temporary residence” is applied to all Chinese citizens. Without the right to own property, and with many forced out of their homes for development, everyone and everything is impermanent:

@空煜断锦: We don’t have any land, houses, even cemeteries that truly belong to us. We don’t have the right to choose how many children we have, to cross the border freely, or to speak freely. We don’t have the power to protect ourselves from unfair treatment. We aren’t citizens, we are denizens, renters with temporary residence on this piece of earth called China.