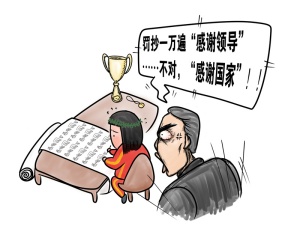 Forced praise for the Chinese Party-state. Originates from a controversy over remarks by gold medalist Zhou Yang.

In March 2010, Chinese speed skater Zhou Yang won the 1,500 meter event at the Vancouver Olympic Winter Games. She thanked her parents for their support at a press conference following her win. Yu Zaiqing, Deputy Director of the National Sports Bureau, criticized her for not first thanking her country. Netizens and state media alike balked at Yu's callousness. The entry about him on Baidu Baike was altered to say that he had "no mother and no father" and was "raised by the Communist Party." As of November 2015, the first paragraph of the Baike entry notes the 2010 controversy, and that he was removed from his position at the National Sports Bureau in September 2011.