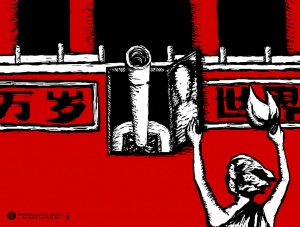 Code for June 4, 1989, the date of the crackdown on pro-democracy protests around Tiananmen Square. (The military operation began late on the night of June 3.) Ordinarily the event is referred to as "June 4th," or simply "Six-Four" (Liùsì 六四), and often written "64." Since these terms are all sensitive words that alert web censors, netizens came up with a new way to mark the date, writing instead about the “Thirty-Fifth of May.”

In the run-up to the 20th anniversary of the Tiananmen Massacre, blog posts by "Deserter" and "17 Cats and Fish" reflected boldly on the time and place. "17" bypassed censors with references to "Something Something Square."

Novelist Yu Hua described the "spirit of May 35th"—in essence grass-mud horsism—in a 2011 essay for the New York Times.

As the censors catch on to code words for Tiananmen, netizens must find more and more veiled terms. In June 2013, even the number 35 was blocked from search results on Weibo. May Thirty-Fifth was also blocked in late May 2014.