This medical procedure was immortalized in internet discourse after .net/2009/09/migrant-worker-receives-615000-yuan-compensation-for-occupational-disease/ Zhang Haichao underwent the procedure to prove that he had lung cancer. Before undergoing the procedure, Zhang Haichao had been diagnosed by a number of hospitals with a form of lung cancer called pneumoconiosis. The condition was caused by Zhang’s employment at an abrasive materials factory near Zhengzhou. In order to receive worker’s compensation, Zhang needed to receive a diagnosis from “the legally designated vocational illness hospital” (法定的职业病诊断机构). However, this hospital at first refused to issue any diagnosis, and only under pressure issued the diagnosis of “tuberculosis,” which was clearly incorrect. Zhang spent two years petitioning the government and finally underwent an invasive surgery called thoracotomy to prove his condition. After an outpouring of online support, Zhang was awarded 615,000 RMB in workers compensation. 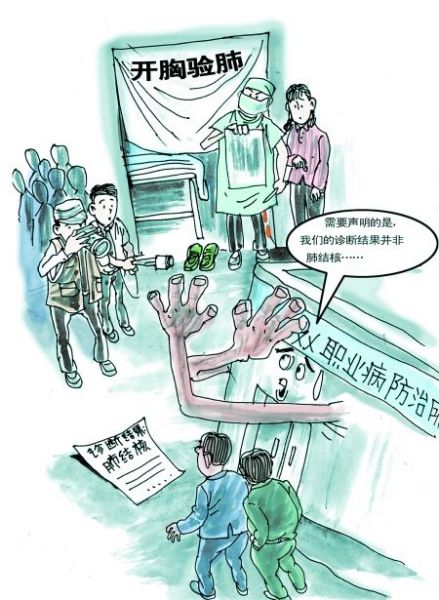 The occupational illness and prevention center is shown waving its hands defensively saying, "What needs to be made clear is that our initial diagnosis was not tuberculosis." On the ground is a paper that states, "Diagnosis: tuberculosis." The banner in the background states, "thoracotomy" under which a doctor stands holding a scalpel and something that looks like an X-ray result.
Retrieved from "http://chinadigitaltimes.net/space/index.php?title=Thoracotomy&oldid=117"