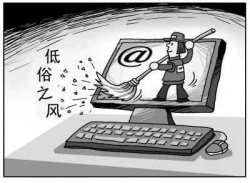 Since 2009, the government has launched similar Internet censorship and anti-vulgarity campaigns.