A very notable use of the phrase 他妈的occurred on July 26th, shortly after the Wenzhou train accident. On July 26th, the Hong Kong Apple Daily and the mainland People’s Daily ran competing headlines.

Several days later, the Southern Metropolis Daily, defied the propaganda department’s ban on critical stories of the train wreck and published an article entitled, “What F**king Miracle?” The article began with this paragraph:

The article criticized the propaganda department's approach of highlighting various “miracle” stories from the crash. One such “miracle story” involved a two and a half year-old girl named Yiyi, who was the last survivor pulled from the train wreckage twenty one hours after the crash. Although both her parents were killed in the crash, the state controlled media gushed over her miraculous survival, in what many believed to be the government’s cynical attempt to put a positive spin on the tragedy and deflect criticism from the Ministry of Railways. (The media often reports similar “miracle stories” after coal mine accidents for the same utilitarian reasons.) 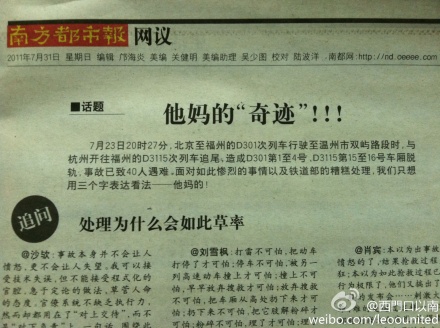