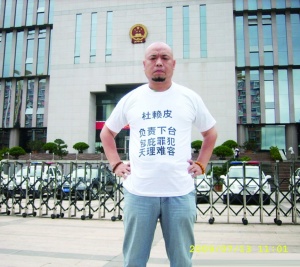 "Super Vulgar Butcher" is the screen name of blogger and activist Wu Gan. Wu has been involved in important rights defense cases since 2009. His detention in May 2015 presaged the Black Friday crackdown on lawyers and activists in July of that year.

Wu Gan is known for his activism both on- and offline, protesting with signs, T-shirts, and performance art in front of court houses. After a decade of military service and a job at the Xiamen airport as a security guard, Wu began to devote himself to blogging in 2008. In May 2008, he advocated for Deng Yujiao, a waitress in Hubei Province who fatally stabbed a male patron when he attempted to sexually assault her. Deng was eventually convicted of "causing injury with intent," a lighter charge than murder. Later that year, Wu helped draw attention to a case in Kunming, Yunnan Province in which a father was accused by the police of prostituting his daughters. It appeared the father had been beaten by the police and forced to confess.

On May 20, 2015, police in Nanchang, Jiangxi Province placed Wu Gan under administrative detention for ten days. Wu had been participating in a demonstration outside of the Jiangxi Higher People's Court against their decision to disallow lawyers access to evidence in an abuse of power case in Leping, Jiangxi. He had also recently posted video footage of the controversial confrontation between petitioner Xu Chunhe and a police officer in Heilongjiang that ended with Xu's death.

After the first ten days of Wu's detention, authorities upgraded the accusations against him to the criminal offenses of "slander" and "picking quarrels and provoking trouble"—a vaguely defined charge increasingly used to detain high-profile activists in recent years. A state media campaign against Wu that followed the accusations defamed him and his family. In one report, a neighbor of Wu’s identified as Mr. Chen said, "Wherever there was trouble, he is on to it like a fly chasing stink, making the most of a mess, afraid that the world was at peace." On Weibo, one of Wu's supporters countered, "If Wu Gan is like a fly following a stench, doesn’t that imply that China is covered in shit?"

Wu Gan was formally arrested on July 7, charged with “inciting subversion of state power” and “creating disturbances.” On August 16, authorities announced the still more serious charge of "subversion of the state," the harshest yet since his initial detention.

Wu had started working with the Beijing Fengrui Law Firm in the spring of 2015. Lawyers and other staff at Fengrui were targeted in a broad sweep of rights defense lawyers and activists on July 9, 2015, known as "Black Friday" or "709." Among those caught that day was Wu's lawyer, Wang Yu, who also worked at Fengrui. In an interview with China Digital Times, public health activist Lu Jun connected Wu's detention and Black Friday to the video of Xu Chunhe's altercation with the police officer. "My point of view is, the direct reason for the police's action could be the police shooting case in Qing'an," Lu said. "Wu Gan posted a video on social media which was quite different from CCTV's video of the shooting, and then he was detained."