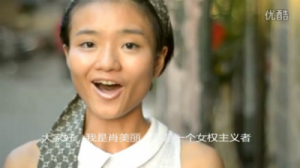 Xiao Meili has played a major role in China’s #MeToo movement, both as an activist and a spokesperson for sexual assault survivors.