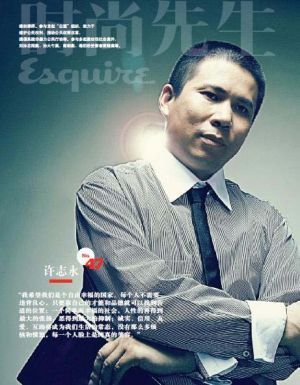 Xu Zhiyong on the cover of Esquire, while he was being detained for alleged tax evasion

Xu Zhiyong (b. 1973) is a legal scholar and rights activist, best known for organizing the New Citizens' Movement.

Xu Zhiyong studied law at Lanzhou University before obtaining his doctorate in law from Peking University in 2002. He went on to become a lecturer at Beijing University of Post and Telecommunications. In 2003, Xu Zhiyong successfully pushed for the abolition of the custody and repatriation system along with Teng Biao, Yu Jiang and several other legal scholars. Xu also launched his political career in the same year by running as an independent candidate in Beijing's Haidian District, winning a seat in the local People’s Congress. He was reelected in 2006. In 2011, his name was pulled from the candidate list.

Xu helped found the Open Constitution Initiative, also known as Gongmeng, an organization that advocated for greater constitutional protection and implementation of the rule of law. [The group was fined and shut down in 2009 on tax evasion charges. In 2012, Xu established the New Citizens’ Movement as the successor to Gongmeng.

Xu has been repeatedly detained or otherwise harassed by the authorities. He was arrested in July 2013 and subsequently sentenced to four years in prison for “gathering crowds to disrupt public order.” His closing statement in court, in which he called for open governance and financial disclosure by officials, was cut short by the judge.

Xu went into hiding after escaping from the police in December 2019. On the lam and amid the initial outbreak of COVID-19, he published an open letter calling for President Xi Jinping to resign. The State Council Information Office issued a directive to have the letter wiped from the internet. Xu was caught on February 15.

In May 2020, Xu was formally arrested after months of detention on the charge of inciting subversion. His charge was later upgraded to subversion, which carries a maximum sentence of life imprisonment. His partner, Li Qiaochu, a labor and women’s rights activist, was also detained on subversion charges. Li has spoken out about Xu's torture in jail.