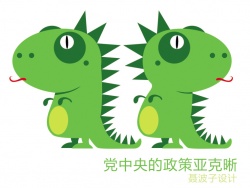 A mythical creature derived from the Uyghur-language word yaxshi (ياخشى‎), meaning “good,” and transliterated into Chinese as 亚克西 yǎkèxī. The word rose to fame after the CCTV 2010 Spring Festival Gala segment “The Party’s Policies are Yaxshi,” in which dancers in traditional Uyghur dress praised the Communist Party, a great irony in light of the inter-ethnic riots in Xinjiang the summer before. Netizens then began using the word to mock the absurdity of the state propaganda and to to sardonically praise policies in the Xinjiang Uyghur Autonomous Region.