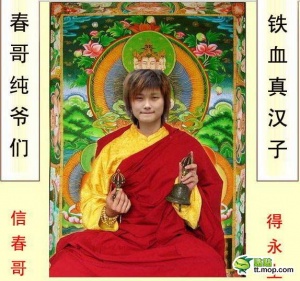 A phrase used to hint at sensitive topics as if one were addressing a higher power. Originates from chatter about Li Yuchun, 2005 winner of China’s Super Girl singing competition. Li attracted a cult following not just for her musical talent, but also for her androgynous appearance. She became the object of online satire and adoring praise. She is often called “Brother Chun” (春哥 Chūn Gē). She became so popular that netizens began depicting her as a savior figure using Christian and Buddhist iconography.

Over the years, "you understand" has become a verbal wink to fellow netizens, replacing reverence for Brother Chun’s omnipotence with respect for the reader’s power of comprehension:

Qidaishuguang168 (@期待曙光168): Don’t get get too excited. The key thing is that President Xi’s prescription for the country demands a powerful, all-knowing executor—and that person is Old Hottie. You understand!

Before the investigation of former security czar Zhou Yongkang went public in July 2014, a government spokesman said at a press conference that corrupt officials would be held to account regardless of status. "I can only say that much," he concluded, "You understand." The Chinese media took "you understand" to mean that they could probe further into Zhou’s case without fear of being censored.