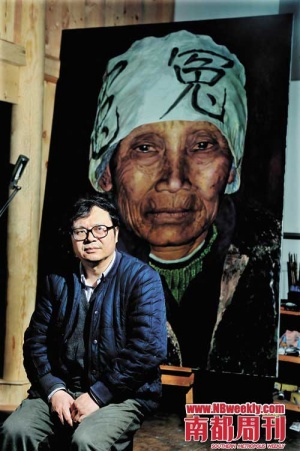 Yu Jianrong is a rural sociologist and advocate for China's marginalized socioeconomic groups. He is the director of the Rural Development Institute at the Chinese Academy of Social Sciences.

Yu has firsthand experience with the struggle of China's rural poor. He was born in 1962 in Hengyang, Hunan Province, four years shy of the Cultural Revolution. His father had been a KMT guerilla, and so his family was stripped of its household registration (hukou) as punishment. Without a hukou, Yu could not legally go to school, and the family was ineligible for government rations and clothes. Yu's mother tried to move herself and her children to her hometown, but the villagers rejected their "black household."

Yu came of age toward the end of the Cultural Revolution, allowing him to make a place for himself in Chinese society. He graduated from Hunan Normal University, where he stayed on to teach until 2003. He earned his PhD in law from the China Rural Issues Institute at Central China Normal University in 2001. Yu went on to a postdoctoral position at the Chinese Academy of Social Sciences, where are has stayed ever since. Yu remains deeply engaged with marginalized communities through extensive fieldwork and advocacy. He has devoted his career to exposing the mistreatment of petitioners, institutionalized disadvantages such as the hukou system, and forced migration.

Netizens know Yu best for his 2011 Weibo campaign, "Take a Photo, Save a Child Beggar." Yu called on the public to post photos of child beggars in order to shed light on the abuse they suffer at the hands of the adults who control them. Many of the children had been crippled and maimed in order to make them easier to control. The posts transformed into a lost-and-found board for missing children.

Yu is at once an "establishment intellectual" and the "poster boy for the Chinese democracy movement," as Andreas Fulda of the University of Nottingham has described him. He has written criticisms of the Chinese political system and offered recommendations for reform. Foreign Policy named him a 2012 Global Thinker for his "10-Year Outline of China's Social and Political Development." In December 2016, he proffered ten "do not's" to the central government, warning them not to "let the constitution be turned into toilet paper." His liberal writing has cost him his WeChat account, but he continues to post to Weibo as of January 2017.