Difference between revisions of "Zhang Wenhong" 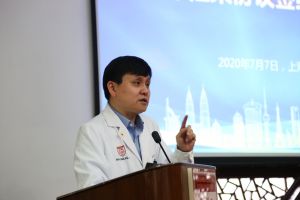 Zhang Wenhong (b. 1969) is a Chinese doctor and leading infectious disease expert. He gained fame for his outspokenness during the COVID-19 pandemic.

Zhang was born in Zhejiang Province and studied at Shanghai Medical University. He now serves as the director of the Department of Infectious Diseases at Huashan Hospital, a medical institution affiliated with Fudan University. He led the efforts to combat COVID-19 in Shanghai.

In February 2020, Zhang said in an interview that he did not believe the coronavirus originated from overseas, and cautioned against making claims without hard evidence. He also made headlines for a press conference he gave in January 2020, where he thanked the frontline workers who availed themselves when the risks of the disease were not fully understood, saying that their sacrifice shall not be taken for granted. Zhang was dubbed “hardcore doctor” by some netizens for his outspokenness.

Zhang became a target of attacks from ultra-nationalists in April 2020 when he suggested that parents should swap rice porridge for protein-rich meals in their children’s diet to boost the immune system. Critics believed that he was being unpatriotic because rice porridge is a popular meal in China.