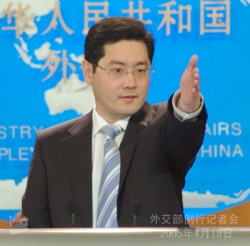 Because the names of government leaders and officials often become sensitive words, netizens frequently invent creative (and pejorative) homonyms to sidestep scrutiny and censorship. A career diplomat, Qin Gang (秦刚) has held a number of official posts at China’s Foreign Ministry since 1992. He is currently a ministry spokesperson and head of the ministry's information department. The characters in his name are homophonic with those meaning “bird anus.” A netizen explains why this nickname fits Qin:

The anus is from where one farts and shits. In other words, if the bird wants to fart, the anus must let the fart pass—the anus cannot decide what kind of fart to fart. That is why he is called “Bird Anus.” [In Chinese “to fart” can also mean “to speak nonsense.”]

Qin Gang has been responsible for a number of other memorable quotations.