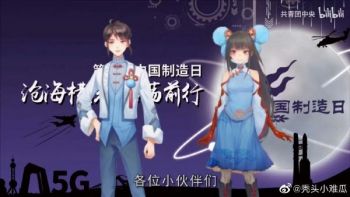 Virtual idol created by the Communist Youth League. The anime-style idols Jiang Shanjiao (江山娇, "Lovable Country") and her "younger brother" Hong Qiman (红旗漫 "Fluttering Red Flag") debuted on Weibo on February 17, 2020 to build a "fandom" for their video blog. The duo's names derive from the poetry of Mao Zedong.

The virtual siblings met with immediate backlash. Netizens were furious that the Youth League launched the characters in the midst of the coronavirus outbreak, which had initially been hidden by censorship and which at that point had killed at least 2112 people in China alone. Weibo users also reacted against being solicited as "fans" of propaganda idols, instead of being considered citizens of the country.

Jiang Shanjiao quickly became a symbol of China's endemic misogyny, as users started asking her rhetorical questions. Jiang Shanjiao initially tried to make peace with her fans and her "haters," but the feminist critiques were scrubbed. One enterprising netizen captured some user questions for posterity:

@为什么它永无止境: Jiang Shanjiao, do you have to give your little brother the money you earn to pay for his wedding and his house?

@为什么它永无止境: Jiang Shanjiao, you're walking so close to your brother Hong Qiman, has anyone called you a whore?

@长树的蘑菇: Her skirt doesn't even come down to her knees! She sure doesn't look like a good girl! (Chinese)

Jiang Shanjiao's Weibo account has been wiped clean, and her channel on the video streaming site Bilibili is gone, too.

See also everything is fake and we want free speech.