Tibet: Her Pain, My Shame 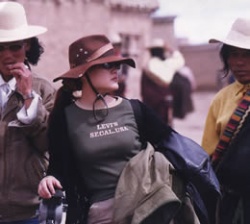 Tang Danhong 唐丹鸿，(born in 1965 ) is a poet and documentary filmmaker from Chengdu, Sichuan. She has made several documentaries in and about Tibet since the 1990s. She wrote the following essay in 2008 and published it on her own blog (hosted outside of China), partially translated by CDT:

… For more than a decade, I have frequently entered Tibet and often stayed there for a long time, traveling or working. I have met all kinds of Tibetans, from youngsters on the streets, folk artists, herders on the grasslands, mystic doctors in mountain villages, to ordinary cadres in state agencies, street vendors in Lhasa, monks and cleaners in monasteries, artists and writers…Among those Tibetans I have met, some frankly told me that Tibet was a small country several decades ago, with its own government, religious leader, currency and military; some stay silent, with a sense of helplessness, and avoid talking with me, a Han Chinese, afraid this is an awkward subject. Some think that no matter what happened, it is an historical fact that Chinese and Tibetans had a long history of exchanges with each other, and the relationship must be carefully maintained by both sides. Some were angered by the railway project, and by those roads named “Beijing Road,” “Jiangsu Road,” “Sichuan-Tibet road,” but others accept them happily. Some say that you (Han Chinese) invest millions in Tibet but you also got what you wanted and even more; some say you invest in the development but you also destroy, and what you destroy is exactly what we treasure….. What I want to say here is that no matter how different these people are, they have one thing in common: They have their own view of history, and a profound religious belief.

For anyone who has been to Tibet, he/she should sense such a religious belief among Tibetans. As the matter of fact, many are shocked by it. Such attitude has carried on throughout their history, and is expressed in their daily lives. This is a very different value, especially compared with those Han Chinese who have no beliefs, and now worship the cult of money. This religious belief is what Tibetans care about the most. They project this belief onto the Dalai Lama as a religious persona. …… For anyone who has been to Tibet, it should not be strange to see the “common Tibetan scene”: Is there any Tibetan who does not worship him (the Dalai Lama)? Is there any Tibetan unwilling to hang up his photo in his own shrine? (These photos are smuggled back in from abroad, secretly copied and enlarged, not like those Mao portraits printed by the government that we Han Chinese once had to hang up.) Is there any Tibetan who wants to verbally disrepect the Dalai Lama? Is there a Tibetan who does not want to see him? Is there any Tibetan who does not want to present Hada [white welcoming scarf] to him?

Other than those voices that the rulers want to hear, have we ever heard the Tibetans’ full, real voices? Those Han Chinese who have been in Tibet, now matter if one is a high official, government cadre, tourist or businessman, have we all heard their real voices, which are silenced, but are still echoing everywhere?

Why can’t we sit down with the Dalai Lama who has abandoned calls for “independence” and now advocates a “middle way,” and negotiate with him with sincerity, to achieve “stability” and “unity” through him?

Because the power difference of the two sides is too big. We are too many people, too powerful: Other than guns and money, and cultural destruction and spiritual rape, we do not know other ways to achieve “harmony.”

This group of people who believe in Buddhism because they believe in cause and effect and transmigration of souls, oppose anger and hatred, developed a philosophy that Han nationalists will never be able to understand. Several Tibetan monk friends, just the “troublemaker monk” type that are in the monasteries explained to me their view on “independence”: “actually, we may well have been ethnic Han in a previous incarnation, and in our next incarnation we might well become ethnic Han. And some ethnic Han in a previous life may well have been Tibetan or may become Tibetan in their next life. Foreigners or Chinese, men or women, lovers aand enemies, the souls of the world transmigrate without end. As the wheel turns, states arise and die, so what need is there for independence?” This kind of religion, this kind of believer, can one ever think that they would be easy to control? Yet there is a paradox here: if one wants them to give up the desire for independence, then one must respect and protect their religion.

Not long ago, I read some posts by some radical Tibetans on an online forum about Tibet. These posts were roughly saying: “We do not believe in Buddhism, we do not believe in karma. But we have not forgotten that we are Tibetan. We have not forgotten our homeland. Now we believe the philosophy of you Han Chinese: Power comes out of the barrel of a gun! Why did you Han Chinese come to Tibet? Tibet belongs to Tibetans. Get out of Tibet!”

Of course behind those posts, there are an overwhelming number of posts from Han “ patriots.” Almost without exception, those replies are full of words such as “Kill them!” “Wipe them out!” “Wash them with blood!” “Dalai is a liar!” — those “passions” of the worshippers of violence that we are all so familiar with.

When I read these posts, I feel so sad. So this is karma. ……

In the last week, after I put down the phone which cannot reach anyone on the the other end, when I face the information black hole caused by internet blockage, even I believe what Xinhua has said — strangely I do believe this part: There were Tibetans who set fire to shops and killed those poor innocent Han Chinese who were just there to make a living. And I still feel extremely sad. Since when were such seeds planted? During the gunshots of 1959? During the massive destruction during the Cultural Revolution? During the crackdown in 1989? During the time we put their Panchen Lama under house arrest and replaced him with our own puppet? During those countless political meetings and confessions in the monasteries? Or during the time when a seventeen-year-old nun was shot on the magnificent snowy mountain, just because she wanted to see the Dalai Lama? ……..

Why can’t you understand that people have different values? While you believe in brainwashing, the power of a gun and of money, there is a spiritual belief that has been in their minds for thousands of years and cannot be washed away. When you claim yourselves as “saviors of Tibetans from slavery society,” I am ashamed for your arrogance and your delusions. When military police with their guns pass by me in the streets of Lhasa, and each time I am there I can see row upon row of military bases… yes, I, a Han Chinese, feel ashamed. ……

What makes me feel most ashamed is the “patriotic majority”: You people are the decedents of Qinshi Huangdi who knows only conquering by killing; you are the chauvinists who rule the weak by force; you are those cowards who hide behind guns and call for shooting the victims; you suffer from Stockholm Syndrome; you are the blood-thirsty crazies of an “advanced” culture of Slow slicing and Castration. You are the sick minds waving the “patriotic” flag. I look down on you. If you are Han Chinese, I am ashamed to be one of you.

Lhasa is on fire, and there are gunshots in Tibetan areas in Sichuan and Qinghai. Even I believe this — actually, I do believe this part of the facts. In those “patriotic” posts which shout “Kill them!” “Wipe them out!” “Wash them with blood!” “Dalai is a liar!” I saw the mirror image of those Tibetan radicals. Let me say that you people (“patriotic youth”) are Han chauvinists who destroy thousands of years of friendship between Han and Tibetan people; you are the main contributors to the hatred between ethnic groups. You people do not really “highly support” the authority; rather, you people are in effect “highly supporting” “Tibetan independence.”

Tibet is disappearing. The spirit which makes her beautiful and peaceful is disappearing. She is becoming us, becoming what she does not want to become. What other choice does she have when facing the anxiety of being alienated? To hold onto her tradition and culture, and revive her ancient civilization? Or to commit suicidal acts which will only add to Han nationalists’ bloody, shameful glory?

Yes, I love Tibet. I am a Han Chinese who loves Tibet, regardless of whether she is a nation or a province, as long as she is so voluntarily. Personally, I would like to have them (Tibetans) belong to the same big family with me. I embrace relationships which come self-selected and on equal footing, not controlled or forced, both between peoples and nations. I have no interest in feeling “powerful,” to make others fear you and be forced to obey you, both between people and between nations, because what’s behind such a “feeling” is truly disgusting. I have left her (Tibet) several years ago, and missing her has become part of my daily life. I long to go back to Tibet, as a welcomed Han Chinese, to enjoy a real friendship as equal neighbor or a family member.

(Tang Danhong moved to Israel from Chengdu in 2005, and is currently teaching Chinese language at Tel Aviv University.)