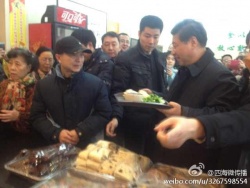 In late December 2013, President Xi Jinping dined at a Beijing chain restaurant that serves up steamed dumplings (包子 baozi)—Chinese comfort food—in a room full of surprised patrons. The president waited in line, ordered his meal—six pork and green onion steamed buns, liver soup, and mustard greens—paid, and carried his own tray to a table. Over 400 customers lined up at the Qingfeng Steamed Bun Shop the next day to order Xi’s meal, which soon sold out.

Netizens are of two minds about Xi’s lunch: some said it demonstrated his concern for the average Chinese citizen, while others thought it was no more than a “political show” (政治作秀 zhengzhi zuoxiu). Xi’s simple meal recalled the humble lunch of noodles enjoyed by Joe Biden and Ambassador Gary Locke in August 2011.

Weibo users searched for symbolic meaning in the dishes the president ordered. Mustard greens (芥菜 jiecai), sounds like “beware of wealth,” perhaps a signal that Xi was serious about cracking down on official corruption. But the trial of rights defense lawyer Xu Zhiyong in late January called into question Xi’s commitment to rule of law.

Return to the 2014 yearbook or to other resources.