Difference between revisions of "Death by drinking boiled water" 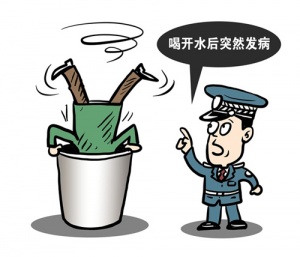 “He drank some boiled water and suddenly fell ill.”

In February 2010, inmate Wang Yahui died from what prison officials claimed was an acute disease he developed from drinking a cup of boiling water. After seeing Wang's mutilated body, which had obvious injuries to the chest, arms, head, and genitals, his family had difficulty believing the explanation given by police. The Henan provincial public security department eventually admitted that Wang had died from police torture.

This incident follows a pattern of similarly suspicious explanations for inmate deaths. See also death by hide-and-seek, death by hanging, death by suffocation by quilt, and death by nightmare.