Revision as of 03:00, 8 November 2010 by Alison (talk | contribs) (Created page with "拆哪 (chāi nǎ) demolish it. This sounds the same in Chinese (''chāi na'') as the English pronunciation of China. The first character means “demolish” and has a special ...")
(diff) ← Older revision | Latest revision (diff) | Newer revision → (diff)
Jump to: navigation, search

Frequently in China one sees spray painted on sides of buildings the character “拆” which means that the building is slated for demolition. People who have had their homes demolished are called 拆迁户. 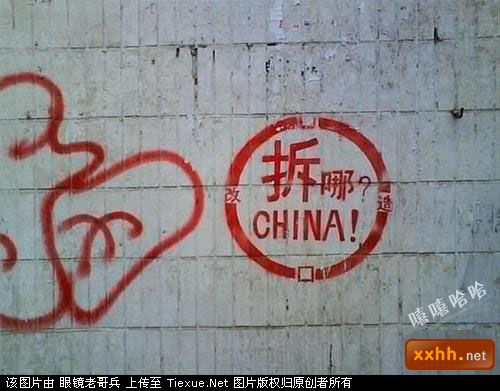 Large "demolish" character atop of which sits a pile of cash labeled "salary."
Retrieved from "http://chinadigitaltimes.net/space/index.php?title=Demolish_it&oldid=266"