Difference between revisions of "Eating Melons" 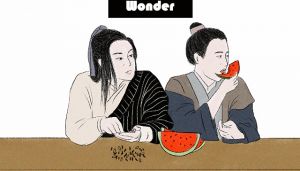 Consuming the latest gossip, from a distance. Incidents become meme-like "melons," which are then "eaten" by those following along on the internet. As opposed to "surround and watch," which implies the application of scrutiny to events of public interest, "eating melons" connotes the private enjoyment of drama, a la "sipping tea" in American parlance.

The phrase has its roots in 2016. Netizens combined the idle melon-eating crowd of China's internet peanut galleries with an official formulation of ignorant public to create the

The popularity of "Eating melons" took of in early 2021 during a series of celebrity scandals, most notably a controversy over a famous actress' surrogacy and tax fraud. For a time, a mobile game with a tongue-in-cheek title nodding at the phrase, "Combine Big Watermelons" was among the most popular games in China.