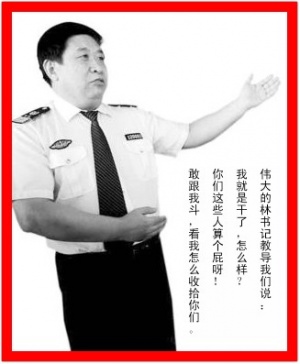 “The great Party Secretary Lin teaches us, ‘I did it, so what? You people are worth less than a fart to me! How dare you mess with me? Just see how I deal with you.’” (source unknown)

Originally an insult, now a label of pride adopted by netizens for self reference. The term comes from a 2008 incident involving Lin Jiaxiang, former Party Secretary of the Shenzhen Maritime Administration, who was caught on surveillance camera harassing an 11-year-old girl. He had asked her where the bathroom was, then cornered her after she showed him the way. After the girl escaped, her parents confronted Lin. Angrily pointing at the girl’s father, Lin shouted:

“You people are worth less than a fart to me” was picked up by netizens, giving rise to the designation “fart people” (shitizen). Netizens have remarked that “without the ability to vote, we matter less than a fart” (没有选票, 我们就是个P!).

In addition to their lack of political power, shitizens are also denied access to the specially-produced safe foods available only to government officials. With regard to this disparity, one Sina Weibo user sarcastically jokes:

Qiwenna (@齊文纳): I finally figured out why people share pictures of their food before they eat it. They are actually not trying to show off... In a situation in which food safety is in jeopardy and shitizens are not qualified to eat specially-supplied foods, taking pictures before meals is a good habit. In case something happens, you would have direct evidence since the picture on your cellphone would match the food uncovered during your autopsy. In addition, since these photos have been posted to Weibo and shared with you circle of friends, those who have seen the pictures can provide additional evidence based on the time you published those posts!