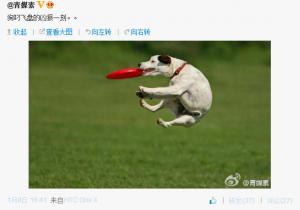 ‘Frisbee Hu’ was re-popularized during the Southern Weekly protests of 2013. Weibo user @sunjinwei74 quipped on January 8 about “that cruel moment when the dog nabs the Frisbee.”

Amid the fallout of the Bo Xilai scandal, Hu Xijin, editor-in-chief of the Global Times, published an editorial entitled “Bo’s Case Shows Resilience of Rule of Law.”

Netizens were scornful of the attempt to find a silver lining in the scandal, wondering why, if the rule of law was so resilient in China, Bo was not questioned earlier for a pattern of alleged misconduct that stretched over decades.

(1) Master Hu has a knack for finding the tasty morsels in any turd you stick in his mouth. (2) No matter how far his masters throw the Frisbee, Master Hu will always fetch it back for them.

“Frisbee Hu” is an editor who will eagerly take a positive spin on whatever facts the government throws him.

Who Does Global Times Speak For?[edit]

How Seriously Should You Take Global Times?[edit]