Difference between revisions of "Hang oneself"

Most Google search results for this term refer to the death of a man, Yuan Zhongru, who died in prison under unusual circumstances. An autopsy revealed a broken sternum, blood pooled in the chest cavity, and a ruptured heart and lungs. However, the police department declared that Yuan died from suicide after hanging himself. However, there were no visible abrasions on his neck where a cord or rope would have rubbed against the skin. Netizens questioned how he could have found something to hang himself while in the interrogation room and wondered what he could have attached the cord to. Netizens blamed the death on police brutality and linked the case to a string of other high profile cases in which inmates died in prison under unusual circumstances. See death from hide and go seek, death from suffocation by quilt, death from nightmare, and death by drinking water. 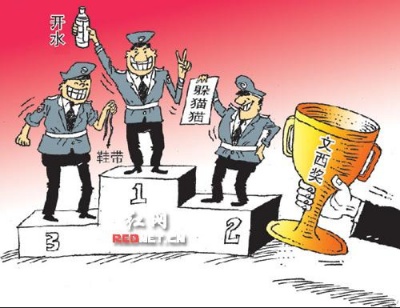 Competition for the lamest excuse for a prison inmate's death. In first place is "drank boiled water," in second place is "played hide and go seek," and in third place is "hung himself with his own shoelace."
Retrieved from "http://chinadigitaltimes.net/space/index.php?title=Hang_oneself&oldid=990"