Difference between revisions of "Huang Zhangjin" 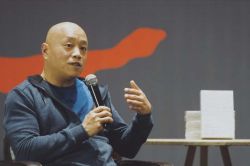 Huang Zhangjin (b. 1970) is a Chinese journalist and blogger. He has written for multiple well-known Chinese outlets and is the founder of Elephant Magazine (大象公会, idaxiang.org), a popular new media platform that publishes articles about history and culture. Huang is a close friend of prominent Uyghur scholar Ilham Tohti, and served for a time as an editor at Ilham's Uyghur Online website.

Huang has written many articles about ethnic relations in Xinjiang, where he grew up. He has drawn attention to discrimination suffered by Uyghur people in China. He is a close friend with Ilham Tohti, a prominent Uyghur scholar and economist who is currently serving a life sentence on separatism charges. When Ilham was detained after the Urumqi riots in July 2009, Huang wrote "Goodbye, Ilham", introducing Ilham's views on ethnic relations to a Han audience:

[...] For many of Ilham’s interests and opinions, all I could do was listen, as I knew nothing about them. He once said hypothetically that, if separatism were still to gain more ground among Uyghurs when China became a liberal democracy, they might borrow from the Republic of Tatarstan, which through the constitution and a series of systemic arrangements stayed within Russia; there were no separatist parties to gain regional control. He also carefully studied the experience of Chinese people in Malaysia, as well as the handling of ethnic relations in Singapore and Europe.

I highly doubt that there existed a Han scholar or a Han official who had ever thought of these issues like Ilham did. [English]

CDT has translated two of Huang's longform blog posts in full: Goodbye, Ilham, quoted above, and Please Tell Them, Yahximusiz.