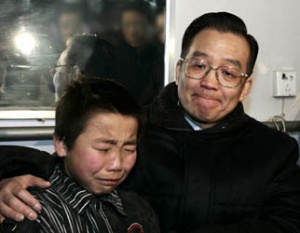 Wen Jiabao consoling the child of a victim of the Tongchuan mine blast, November 2004. (Source: Lan Hongguang for Xinhua)

A catchphrase of former Premier Wen Jiabao. His first apology for a late arrival came on a trip to Tongchuan, Shaanxi after a gas explosion in a coal mine there in 2004 killed 166 people. From then on, netizens noted Wen's every apology for being late at the scenes of natural and man-made disasters: a southern snow storm in January 2008, the devastating Sichuan earthquake of May 8, 2008, and the site of the Wenzhou train crash stand out in the public memory. Instead of praise for "Grandpa Wen," netizens often thought he was feeding the people and the media a clever line. They believed he lacked real concern for the plight of the Chinese people.

"I'm late" also recalls former Premier Zhao Ziyang's final appearance in public, when he spoke to student protesters in Tiananmen Square on May 19, 1989. "Students, we have come too late" (同学们，我们来得太晚了) he began, in a speech encouraging students to end their hunger strike. Wen Jiabao accompanied Zhao in the square.